Progress waits for nobody. Companies around the world are becoming more and more dependent on information technology. Non-stop access to email, file servers, databases and online services is no longer a competitive advantage – it’s a vital necessity, that employee productivity depends on. Constant network availability is one of the most important aspects one must consider when planning a network topology. User demands are increasing every year, as are the quality standards that modern networks must comply with.

Today’s networks must not only have low jitter and latency levels, but must also be redundant and achieve five-nine (99,999%) availability. This means only a bit over 5 minutes of down time per year. To achieve these high standards, networks are designed with redundancy in mind, that is multiple physical paths to every network segment.

Multiple physical paths create a highly undesirable condition within a network: switching loops. Network loops lead to broadcast storms, multiple frame copies, and MAC address-table instability. This is where the Spanning-Tree Protocol (STP) comes in. The role of the STP is to create a loop less logical topology, in redundant networks.

The purpose of this paper is to briefly describe the STP and it’s function in redundant network topologies. I describe the attack vector that can be used to disrupt the stability of the STP’s operations, and provide a working implementation as proof of concept.

Take a look at the network below. It illustrates a simple redundant topology. If someone pulls out the power plug of one of the Layer 2 Switches (green) (for example, the janitor, because he needed a place to plug in his vacuum cleaner), or there is a network cable failure between a L2 and the L3 Switch (red), the network will still operate, because there is more than one path to any network segment.

If a physical link between the Layer 3 Switch (red) and a Layer 2 Switch (green) fails,
this redundant network topology will remain operational.

Redundant topologies naturally have physical loops within them. Because layer 2 frames have on Time-To-Live mechanism, loops within a network lead to switching problems like broadcast storms and MAC address-table instability instability. This results in high latency, unreliable network operations, and in turn user complains.

Defined in the IEEE 802.1d, the STP was designed to ensure a loop less network environment. It allows switches to create a loop free logical topology, even if the network has physical loops within it. The STP operates by moving switch ports into blocking or forwarding states depending on the segments they connect to. There are three basic steps in which STP establishes it’s topology: electing the root bridge, selecting one root port on every non-root bridge and selecting one designated port per network segment.

When the STP is in use every port on a switch goes through several stages.

After about 50s every port on a switch is placed either in forwarding or blocking state, thus creating a logical, loop-free topology. During the election process each switch sends and receives BPDUs and processes received BPDUs to determine the root bridge. A BPDU looks like this (in C language):

After the root bridge elections, every switch sets it’s ports to either forwarding or blocking states. The network might look something like this:

If a network topology change occurs (a link goes down or a new switch goes down/is added to the network), the election process must be repeated. To indicate that it’s still operating, the root switch continuously sends its BPDUs. These intervals are controlled by the hello_time field in the BPDUs (by default 2 seconds). If every switch within the broadcast domain doesn’t receive the root bridge’s BPDUs within the time defined in the max_age field, the root bridge is considered down and a new election is started.

Our attack vector is to disrupt the switch’s spanning-trees, destabilize their MAC address-tables and hold the network in a constant state of reelecting the root bridge. We can achieve this, because there is no authentication mechanism build into the STP.

By repeating this process, the network will be in a constant state of reelecting the root bridge, and any broadcast or multicast traffic will cause a broadcast storm, saturating a network with frames.

Let’s see how we can make this happen under Linux. First we must create a low level socket to craft our packets. The Spanning-Tree Protocol operates at the data-link layer. We will need to create our packets from the very lowest layer, including the headers for our Ethernet frames. But first the socket:

Sending frames in Linux at layer 2 requires using the sockaddr_ll structure when calling the sento() function. This structure is defined in include/linux/if_packet.h as:

We set the sll_family field to AF_PACKET and sll_protocol to 0. In order to retrieve the interface index we want to set in sll_ifindex, we must use the ifreq structure and ioctl() function. sll_hatype, sll_pkttype and sll_halen should equal 1, 0 and 6 respectively. Finally we set the interfaces hardware address in sll_addr[8]. First we must have the identifier for the interface we want to use in text form like eth0 or fxp0, or whatever. See the following example:

Next we can proceed to craft our BPDUs. We start of by defining a root bridge identifier. In order to elect our “ghost” bridge as root, it must have the lowest identifier in the network. Priority and hardware address are the two components of the the bridge ID. The first two bytes are the priority, the next 6 are the MAC address. By definition priority varies between 1 and 32768, therefore setting it the ID to [0x00][0x01][anything x 6 bytes] should yield expected results. We are two approaches here: a) to use the same bridge ID in every packet b) we can randomize it for every frame.

Next we create and fill a eth_stp structure. In my implementation I use the following functions:

In the function fill_stp_header() the parameters have the following meaning

After we have prepared our header and gathered all the necessary information, we can send our frames using the very basic sendto() function.

This concludes the code writing section of this document. The described vulnerability permits all sorts of attacks, not just the simple denial of service that I described. For more details refer to [1].

There are a couple of simple methods to prevent the exploitation of the STP vulnerability in your network. For any STP attack to be feasible, the switch must accept BPDUs on a port that the attacker has access to. It is therefore possible to make such an attack impossible by denying access to STP enabled ports to ordinary users. This can be done by disabling STP on access ports, having port security enabled on all user ports, and restricting physical access to network equipment.

With disabled STP on user ports, the attacker would have to access the switch physically and use a switch-to-switch port to connect his computer to (assuming all non-used ports are either disabled or have STP disabled). If you cannot restrict physical access to your network devices, other measures must be taken to ensure network security. Port security is a feature that allows the switch to accept frames from only a given number (usually the first learned) of source MAC addresses. Enabling port security on user ports will make the attack unfeasible without prior network sniffing or hijacking a user’s workstation.

While most network administrators concentrate on security issues regarding the upper layers of the OSI model (3-7) like route poisoning, access filtering and exploitable service bugs, many still neglect the basic security risks of the physical and data link layers. Restricting physical access to network devices is an important part of one’s security policy, but securing the data link shouldn’t go overlooked. In the past the second layer of the OSI model had to handle forwarding and physical addressing. As the demand we put on network has grown so has the complexity of the protocols working at this level.

The Spanning-Tree Protocol’s flaws are minor, but can lead to a denial of service that can be carried out by even a relatively unskilled attacker. The measures that can be taken to prevent the attack should become a standard for basic security in LAN environments.

The janitor who changed the world of science

Mostly forgotten by history, James Croll is a fairy tale in the history of science. See if you’ll also fall in love with the Earth’s deep history with CuriosityStream: https://www.curiositystream.com/simonclark
Since discovering the story of James Croll while researching Firmament, I knew I had to make a video about him and his remarkable life story. From his job as a janitor at a university he changed the world of science with his remarkable theory of orbital variations that became known as Milankovitch cycles. I hope that this video teaches you a few things. First that sometimes there are remarkable individuals in the history who go against the broad factors that determine progress. Second, that science communication, increasingly popular in the nineteenth century, has a very real impact on the development of science and scientists, popularising education beyond an elite core. Third, that the history of science is full of alsorans, second to the punches, and men and women who didn’t quite forge the final link in understanding. Their stories are important too!
Preorder my book! https://geni.us/firmament
Full talk on James Croll: https://www.youtube.com/watch?v=FKF8novHwiU
REFERENCES
(1) Adapted from https://en.wikipedia.org/wiki/Milankovitch_cycles/media/File:MilankovitchCyclesOrbitandCores.png
(2) https://climate.nasa.gov/news/2948/milankovitchorbitalcyclesandtheirroleinearthsclimate/
(3) https://websites.pmc.ucsc.edu/~pkoch/EART_206/090303/Hays%20et%2076%20Science%201941121.pdf
You can support the channel by becoming a patron at http://www.patreon.com/simonoxfphys
Check out my website! https://www.simonoxfphys.com/
II
My twitter http://www.twitter.com/simonoxfphys
My facebook http://www.facebook.com/youtubesimon
My insta http://www.instagram.com/simonoxfphys
My goodreads http://www.goodreads.com/simonoxfphys
II
Music by Epidemic Sound: http://epidemicsound.com
Some stock footage courtesy of Getty.
Everyone has heard of Milankovic cycles or Milankovitch cycles, but few have heard of the remarkable janitor who originally came up with the idea that orbital variations force the Earth’s climate. The real life Good Will Hunting, James Croll, came up with the maths that became Milankovitch cycles while a janitor. This interesting video is about the history of science and history of climate change, similar to videos by crash course, scishow, veritasium, and smarter every day.
Huge thanks to my supporters on Patreon: Rapssack, Kevin O’Connor, Timo Kerremans, Thines Ganeshamoorthy, Jerry Moore, Sam Harvey (the ever lasting student), Ashley Wilkins, Michael Parmenter, Samuel Baumgartner, Dan Sherman, ST0RMW1NG 1, Adrian Sand, Morten Engsvang, Josh Schiager, Farsight101, Liam Margetts, K.L, poundedjam, Felix Freiberger, Chris Field, Robert Connell, Jaime Stark, Kolbrandr, , Sebastain Graf, Dan Nelson, Shane O’Brien, Alex, Fujia Li, Harry Eakins, Cody VanZandt, Jesper Koed, Jonathan Craske, Albrecht Striffler, Jon Sjöberg, Igor Francetic, Jack Troup, SexyCaveman , James Munro, Oskar Hellström, Sean Richards, Kedar , Omar Miranda, Alastair Fortune, bitreign33 , Mat Allen, Anne Smith, Rafaela Corrêa Pereira, Colin J. Brown, Princess Andromeda, Aron Kári Ágústsson, Leighton Mackenzie, BenDent, Thusto , Andy Hartley, Lachlan Woods, Tim Boxall, Dan Hanvey, Simon Donkers, Kodzo , James Bridges, Liam , Andrea De Mezzo, Wendover Productions, Kendra Johnson. 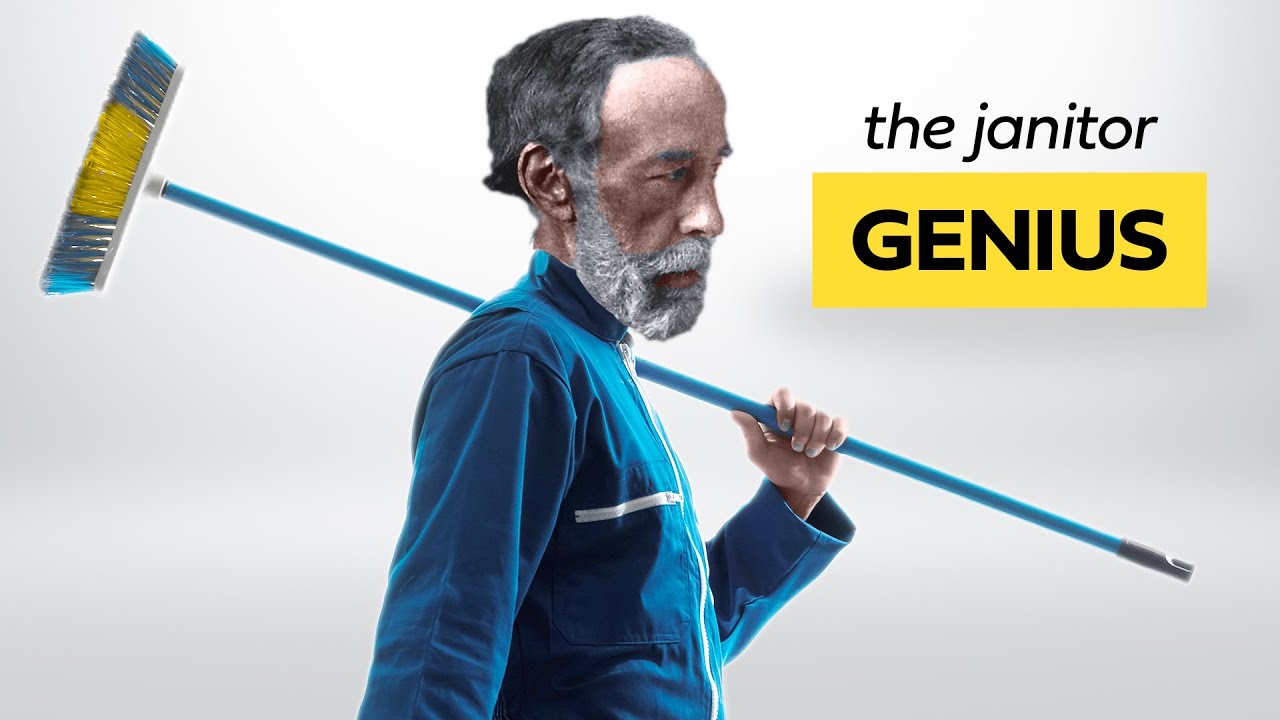 The Janitor – A Short Documentary

The first documentary I ever made, as a 22yearold film school student. Featuring two university janitors, Leslee Adrian and Serena Kohls. Shot at Capilano University, in North Vancouver, BC, Canada. 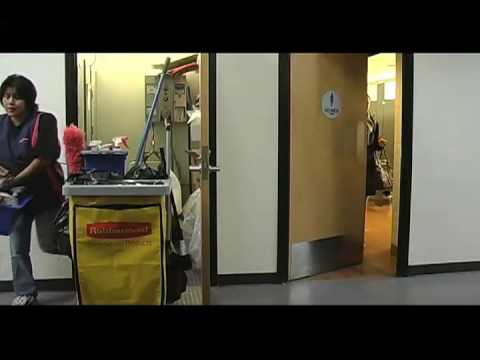 School custodian what we do in the summer?

This is what happens in schools during the summer when everyone else is on summer vacations. This just shows a little I didn’t include the 8 stairwells. And the 10 thousand sq feet lunchroom and the 2 gyms. plus all the office’s and 30 bathrooms. Lol talk about job security. https://youtu.be/rLssYA1fVM4 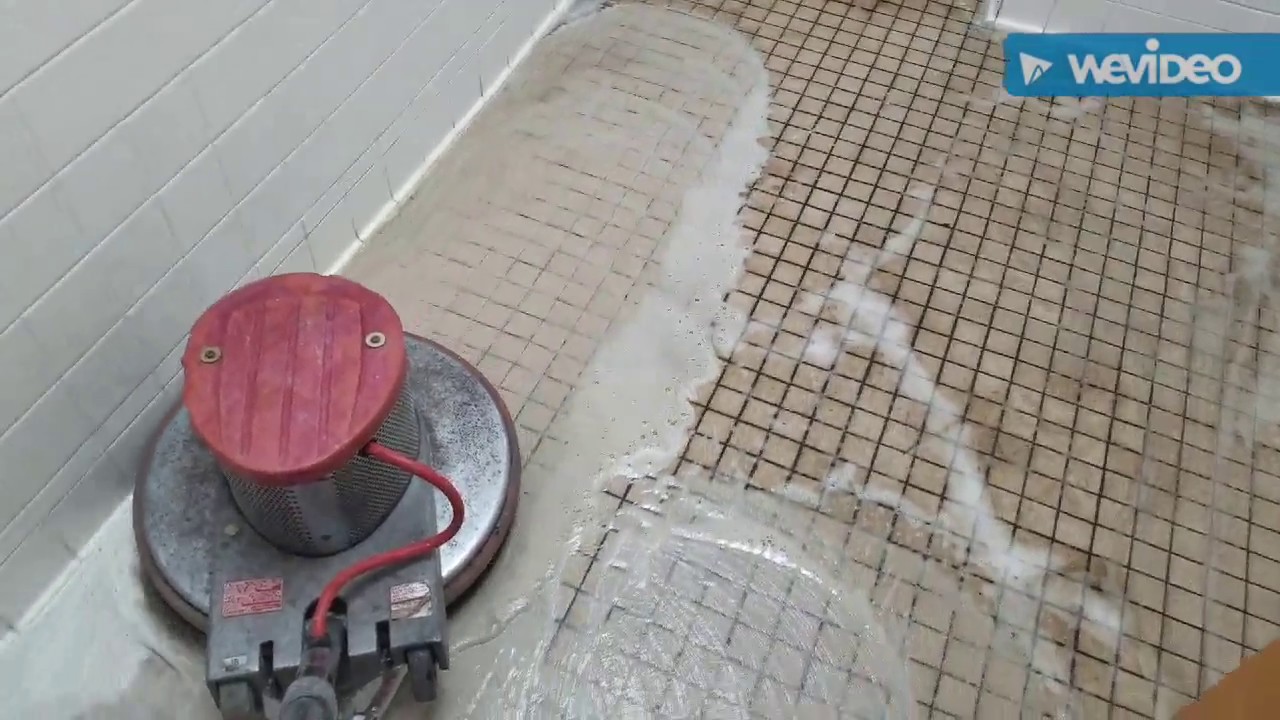 HBS Janitorial Training Video: How to clean a toilet

HBS Janitorial Training Video: How to clean a toilet 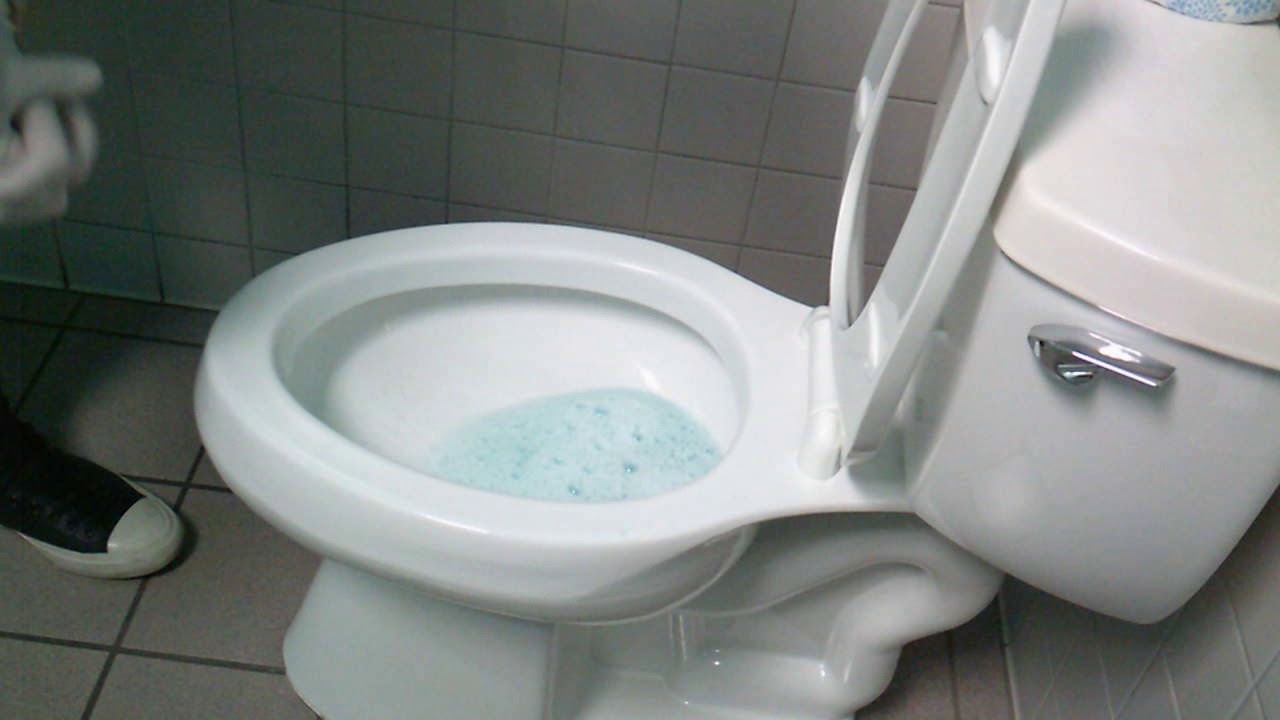 Finalist for the ISSA Innovation Award 2019: Janitorial Manager by Double A Solutions 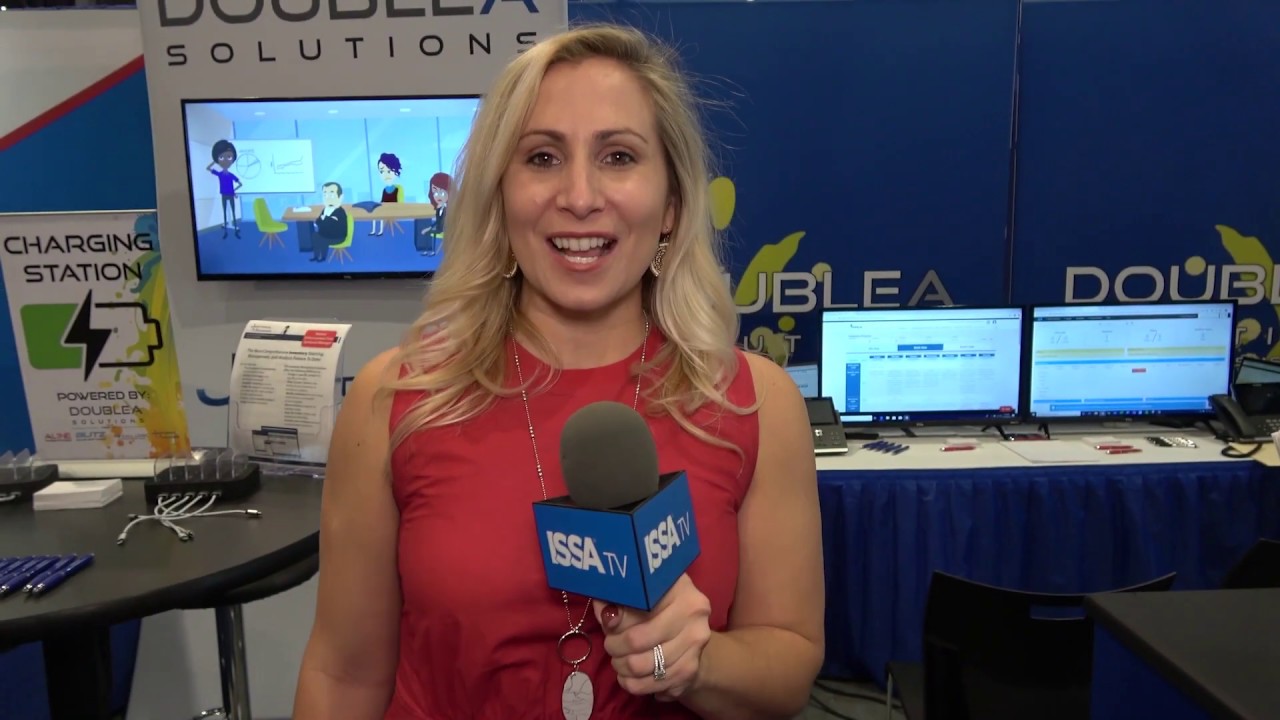